Social media has matured substantially over the past 14 years, with most users now accepting, and being more likely to trust, social networking as an effective way to communicate. This has led to it becoming easier to use social media to assist with fundraising efforts, both for well planned projects as well as more immediate needs such as disaster relief.

In January 2011, we had terrible flooding which affected most of the state of Queensland in Australia. Rotaractors tweeted and used their Facebook statuses to spread news that District 9830 in the state of Tasmania was getting donations made through them matched dollar for dollar through the local state government, up to a maximum of $250,000.

I saw the news on Facebook and helped spread that news through my own accounts, including my business Twitter accounts, and through the Rotary Facebook pages that I administer. 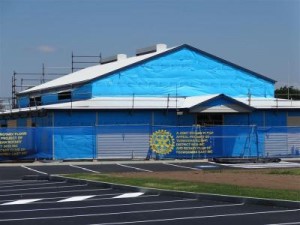 I announced it at my club meeting on Wednesday that week, two days later, along with news that Shelterbox already had personnel on the ground assessing needs; I had seen that news on Facebook as I follow the Shelterbox Australia page. At a district function on the Friday evening, I heard a fellow club member repeat the information to a Rotarian in another club, who asked how I had heard the news so quickly. It took my district a month to decide how to respond to the disaster and communicate that to the clubs; in the mean time, many of us had donated funds through the district in Tasmania.

District 9830 raised AUS$911,000, which is double the combined total raised by three other service clubs in Tasmania. That speaks volumes about the benefit of using social media to rapidly spread the word about how to help at a time when people are eager to help out and are looking for how best to help. The money was used to build a replacement community centre at Murphys Creek in the Lockyer Valley. 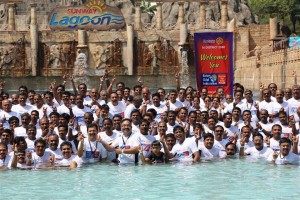 Another fundraising success story is the Rotary Global Swimarathon, coordinated by the Rotary Club of Grantham, UK. Contacts made by reaching out to clubs via Facebook and Twitter and regular promotion and updates saw 5,244 swimmers from 104 clubs in 23 countries setting a new world record for the highest number of simultaneous swimmers at on 23 February 2012, raising over US$100,000 for polio eradication in the process.

Again, they used multiple channels: Rotarian Paul Wilson from the Grantham club made heavy use of his personal profile to reach out to Rotarians and clubs on a personal level. He also used his club’s Facebook page, a dedicated Facebook page for the Swimarathon, a twitter account, a website, and a blog, to provide regular updates and communications with stakeholders. It has now become an annual event, with more and more clubs coming on board every year. In 2013, participation rose to 6103 swimmers from 186 clubs in 36 countries, with a total of US$111,081 raised, and this year a total of $116,700 was raised from 210 clubs.

But it’s not all about you…

As easy as it is to reach out via social media, it is important to strike a balance between getting your message out to as many people as possible and spamming them with too many updates or filling their newsfeed with your stuff. People will tune you out if you are in their face with what you want to blurt out rather than taking time to build engaging relationships within your channels first.

If you would like assistance with using social media to boost your fundraising activities, we’re here to help – with ideas, or practical support on how to build up relationships with key stakeholders and make effective use of various channels available.

How have you used social media for fundraising?

I originally published this article on rosnf.net on 23 July 2014.