The aim of the campaign was to gain new members, not simply gain awareness of Rotary. As such the ads took people to a landing page built specifically for that purpose on the club’s website at http://rotarywilletton.org.au/index.php?section=about rather than encouraging people to “Like” the Facebook page.

Rather than aiming to maximising the clicks, the ads were worded and audiences carefully targeted by age, profession, location, interests, beliefs etc to limit exposure to people thought to be qualified for membership and more likely to take action to eventually join Rotary.

The landing page emphasised that commitment is required, but that in return you have fun and feel good. The club specifically did not want to say things like “attendance is not really that important” or “it really does not take time”, choosing instead to rule out anyone not willing to make an ongoing commitment.

Investing AUD $500 (1:1 with the USD) on pay per click ads going through to a targeted landing page generated:

15 different versions of the ad were used, targeted to different audiences. By far the best performing ads were two directed to women 25-55 years old within 15km of the meeting location. All 5 people that contacted the Willetton club were women that clicked the first of those ads. Ads targeting small business owners and young adults aged 27 – 37 years old who have completed university studies were also popular in terms of clicks, but none of them resulted in a visit to the club. 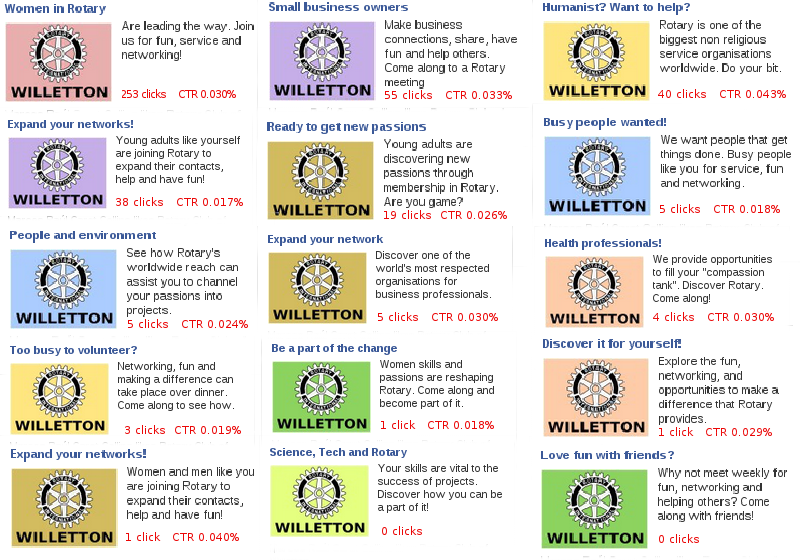 Compared with previous attempts with fliers in the local newspaper, at a cost of around AUD $3,000, which reached about 30,000 people and resulted in one new member, this was considered to be a far more successful approach at a fraction the price.

I originally published this article on rosnf.net on 2 October 2012.